State Representative Bobby Gibson was elected to represent the Fifteenth District of the Connecticut House of Representatives on January 9, 2018. Gibson first garnered widespread notoriety while serving as a teacher in Bloomfield, Hartford, and the Capital Region Educational Council where he positively influenced the lives of students for well over two decades. State Representative Gibson also coached hundreds of student-athletes, while winning many Conference and State Championships in Basketball, Track and Field, and Football. Gibson sits on the Board of Directors for Discovering Amistad and the Bloomfield Raiders Youth Football Team. Representative Gibson has also served as the First District Social Action Chairman and Basileus of the Tau Iota Chapter of Omega Psi Phi Fraternity, Inc., where the Chapter of the Year distinction is an expectation.

Gibson has received Educator Awards for his dedication to improve the outcomes for his students. He has been named Coach of the Year by the Connecticut High School Coaches Association. State Representative Gibson has also twice received awards from the Connecticut State Conference of NAACP Branches 100 Most Influential Blacks in Connecticut, The Links Incorporated Farmington Connecticut Chapter, Prince Hall Foundation of Connecticut, Composite Lodge #22 of Bloomfield Connecticut, 100 Black Men, The Institute for Cross-Cultural Awareness and Transformative Education Award, Connecticut League of Conservational Voters Environmental Champion, The Greater Hartford Interdenominational Ministerial Alliance 2020 Drum Major Award for politics, The Hopewell Baptist Church Teen Honoree, and has been named Omega Psi Phi Fraternity, Inc. Citizen of the Year twice and Omega Man of the Year.

State Representative Gibson’s story is one of manhood despite the odds and persevering over obstacles despite what life has put before him. He believes that scholarship is the key to achieving a positive effect on the life of any human being. He is a champion for the access to lifelong learning.

He attended Southern Connecticut State University and conferred his bachelor’s degree from Charter Oak State College. He received his Master of Arts from the Graduate Institute and is currently pursuing further education.

State Representative Gibson is bringing the same energy, passion, determination, work ethic, and uplift that his community has come to know and respect to the Capitol of Connecticut. Representative Gibson is the Chief Majority Whip. He serves as the Vice-Chairman of the General Law Committee, and is on the Education Committee and Conservation and Development Sub Committee Co-Chair for the Appropriations Committee. Gibson is also the Vice Chairman of the Connecticut General Assembly’s Black and Puerto Rican Caucus. 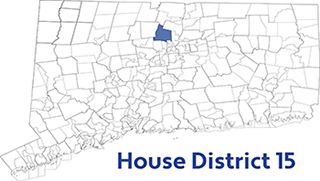